Imagine how someone else imagines a classic book. 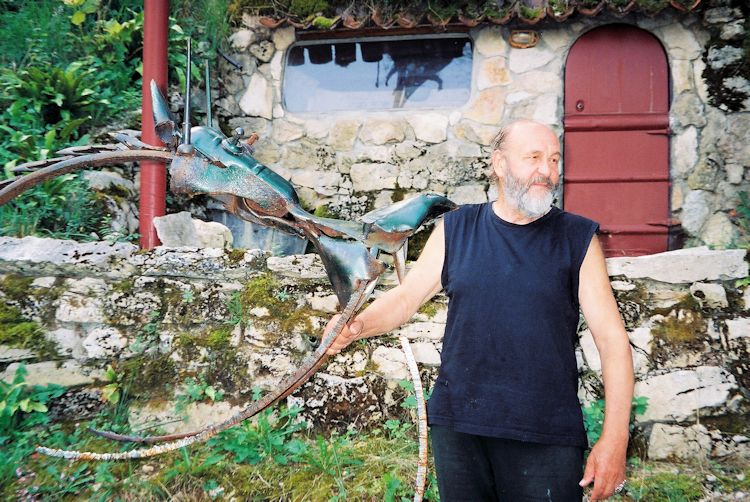 Gregor Kartai and one of his creations at Rocamadour.

You can with Rocamadour pilgrim Belgian violinist and sculptor Gregor Kartai who created a piece of J.R.R. Tolkein’s Middle Earth just metres from where most visitors park their cars before scaling the steps to village’s main street.

When Gregor arrived in the 1970s, he had not read Lord of the Rings but, once he did, he saw the surrounds as the perfect setting to create his own version of Hobbiton.

He set about presenting his spin on the imaginary world that Tolkein created.

Just below a natural, 100m long amphitheatre formed in the canyon wall behind his house, Gregor built a hobbit house which is surrounded by metal and wood sculptures.

His Gollum he fashioned from an old lamp, car exhaust pipe and papier mache. “This is Tolkein in organic art,” Gregor says. “I find things around here in the woods that speak to me. It is a gold mine.”

Summers he spends at Rocamadour and winters in Belgium where he performs theatre music. Jazz and salsa are also part of his repertoire.

His sprightly manner and infectious life perspective give lie to his 78 years.

Rocamadour is in the Cahors regions in the mini-Pyrenees about 500km southwest of Paris.