Piecing together this timepiece's journey 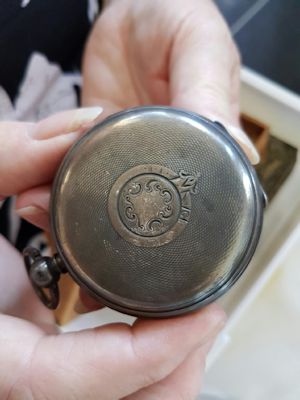 The pocket watch in which is inscribed the name "Geo. Donald". The watch is being held by James Silver's great-great-granddaughter Melanie who is a jeweller/watchmaker.

This picture is of a pocket watch (or fob watch) manufactured sometime in the 1800s in Scotland with the name "Geo. Donald" inscribed on it.

It is in the possession of descendants of James Silver who grew up in Scotland and moved to Australia in 1890 when aged 27.

On the assumption that James Silver brought the watch with him from his home country; how then did it come into his possession?

When discussing this in 2017, James Silver's granddaughter June Nunn (nee Dobbs) suggested it may have been given in payment for work done.

James Silver was a carpenter who did his apprenticeship with a fellow named James Troup who lived at Cockley, Maryculter in the Aberdeenshire district.

James Silver grew up not far away at Burnside farm as well as at Crossley farm, both farms being within walking distance of each other and also a similar distance from Cockley farm.

According to the 1881 census, there was a George Donald who farmed at Drumoak about 3km away and just across the River Dee from where young James Silver was learning his trade.

So it is no stretch of credibility that James Silver at some point between 1881 and 1890 did some work for George Donald.

And it is also a possibility that George gave James this watch in payment.

It would not have been an unusual thing at the time and still happens today where people trade their time for goods.

None of this can be proved, of course, and who's to say that the watch belonged to the same George Donald? However, the circumstantial evidence is compelling.

And there is a little twist to the scenario in that George Donald's daughter, Christina, married one of James Silver's distant cousins, Andrew Silver.

James Silver (born April 1863) and Andrew Silver (born December 1862) grew up about a kilometre apart and they would have known one another.