A wish engraved in his soul ... 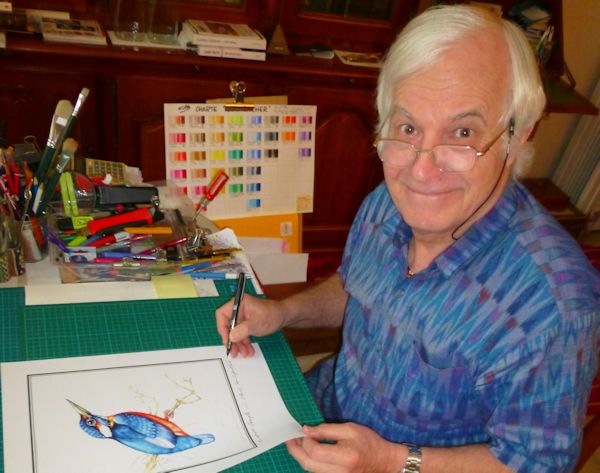 Chris Souilijaert at work on his Nomads of the Wind series.

Exotic birds – scores of them in glorious watercolors – stand as a measure of certainty and permanence in our fleeting, digital age.

Despite that digital age, we are still mesmerised, enchanted and encouraged by the storytelling that adventurers bring us.

They can entice us into the world they create through their words, photographs and paintings. We can see ourselves on a South Pacific island, in the Amazon or on an African safari.

And rather than a Facebook post, there is something far more substantial and textural when that imagery is wrought from more than half a century of criss-crossing the globe and filling up travel journals with drawings and ideas as one “citizen of the world” has done.

Back in the 1960s when Chris Souilijaert, a then 20-something artist-illustrator, embarked on his first complete turn around the globe, he could not have envisioned today’s world to which he is offering an insight into some of the beauty he has encountered.

Arguably, such a detailed record would not have been possible if that first trip were merely a few days spent in an exotic location.

In fact, Chris spent about 1000 days exploring several countries on that first trip and that kick-started a passion for travel and led to him wandering the globe soaking up various cultures and, of course, the natural beauty.

Confronted by the increasing number of bird species that have disappeared in more recent decades because of man’s encroachment into and destruction of habitats, Chris wanted to leave a “witness to the beautiful things still left on earth”.

So his “Nomads of the Wind” exhibition of original watercolors (70 pieces and growing) which has been birthed from the pages of those many travel journals, is a reminder that true visual satisfaction is found in the nuances of an artist’s brush, in the way the very last detail of a creature is teased out from the mind and then lovingly and skilfully transferred to the medium on which it is recorded.

Now, “in the winter of my life,” Chris says he feels a bit like an old monk transcribing with love and passion each letter of a manuscript that will one day make up a completed work.

“It’s like not knowing if the book will be finished during his own lifetime… but there’s a wish engraved in his soul that one day some other human beings might see as well the beauty, the universal legacy as another witness of the beautiful things still left on earth,” says Chris. 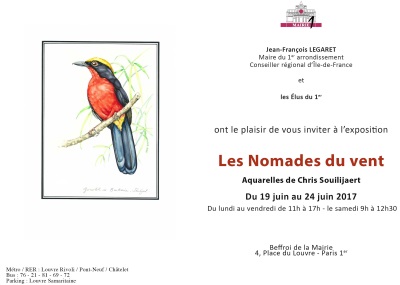 Invitation to the 2017 Paris exhibition.

To him, it is like a visual replay to inspire others: “Every passion should be encouraged whether it’s stamp collecting, growing a garden, raising snails or admiring the grace, elegance and diversity of birds around the earth”.

As he applies each stroke, Chris has no thought of trying to compete with the visual complexity of computer-generated images. Rather his aim is to transform the viewer to fly along with the birds and “admire the wonderful diversity and colors of the nomads of the wind”.

That means sparking a person’s imagination enough that the imagery will tell them a story and they too can join in the adventure.

After several recent successful exhibitions in France and previously in various countries including Australia, Chris wants to bring his latest creations back Down Under where he lived and worked for about four decades; perhaps even for their first showing.

For a sneak peek of “Nomads of the Wind”, visit chrissouilijaert.com (click on contact/shop icon).

UPDATE: The Paris Art Committee will feature the Nomads of the Wind exhibition at the historic council chambers building at 4 Place du Louvre, Paris, opposite the Louvre Museum from 19 to 24 June 2017.