Written in 1999 after I interviewed Tony Joe White at the Byron Bay Blues Festival:

THE jukebox in the corner of the smoky bar in Bosnia plays only one kind of music. The singer, in a drawl from somewhere near the heart of America's Deep South, tells the drinkers tales of alligators, swamps and the strange people who inhabit them. 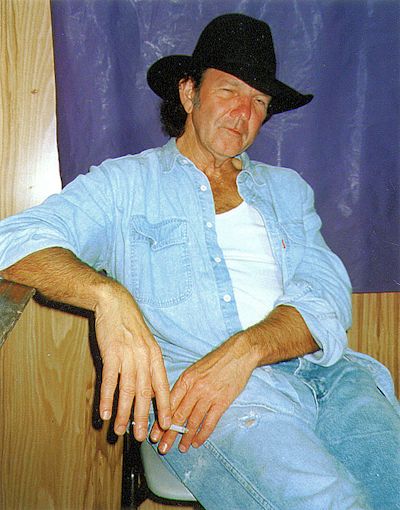 It's the stuff of another world, but the clientele is trying to escape Bosnia's sombre post-war reality and these songs give them what they want. So much so that some of the patrons write to the American, Tony Joe White, to tell him how they feel.

When Tony Joe took the stage at the Byron Bay Blues Festival in Northern New South Wales, Australia, over Easter he demonstrated the style that has won him an international cult following over almost 30 years.

But for his telltale drawl, he could be the bloke next door. He's 53, a father of three, grandfather of one and has been married to Leann for 33 years.

He has a house outside of town and a cabin in the mountains. He likes to fish and stay in tune with nature. Born and raised on a cotton farm near the Louisiana swamps, he is the youngest of seven children.

His tools of trade are simple; a guitar and harmonica. This, then, is the singer, songwriter and performer of swamp music.

That music was, predictably, shaped by the environment he grew up in America's Deep South. It has its own mystique; alligators lurk, hoot owls call and the mythical troll prowls.

How does he explain the appeal of this to people in a Bosnian hellhole?

"Maybe the realness of it. It's not intended for no charts or Billboard magazine. It reaches people in a lot of different places. And maybe it's writing pretty close to home what you feel and what you see and not trying to be on the top 40."

The swamp is mystical not just for Tony Joe, but also for fans.

"The word itself is so mystical. People love to say that word. Swaaamp, or swampy, and they always laugh. It's (the swamp) one of the few things left alone, he says."

It was the French who started a love affair with his music, tagging it swamp rock and calling him the Swamp Fox.

"I don't have no problem with that," says Tony Joe.

Whether it be the swamp, his home in Tennessee or his shack in the Ozark Mountains, being close to nature is important.

Way back in the woods

"I've always got to be around close to that. Where I live is important to my writing. I live way back in the woods near a little river; I hear the bullfrogs and hoot owls and take out my guitar and it happens."

Two songs written within a fortnight in 1968, Polk Salad Annie and Rainy Night in Georgia, arguably define the artist.

Elvis Presley added to the popularity of Polk Salad Annie by performing it and Brook Benton made Rainy Night in Georgia his signature tune. That's all right with the Swamp Fox, who has Tina Turner and Joe Cocker singing his stuff these days.

"When he got out of high school and was driving trucks in Georgia it seemed that it was 'raining all over the world'."

"I lived that, just like polk salad that my momma made me eat."

To Tony Joe the songs are not that different.

"Some people say 'you out-swamp rock and you out-swamp blues', but writing don't have any kind of boundaries. I worked driving trucks in Georgia and those rainy nights were real." 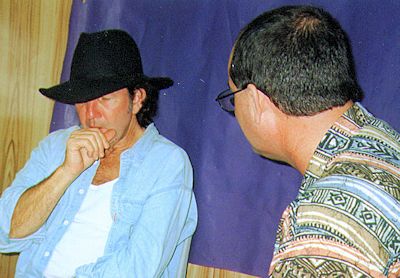 Me with Tony Joe White in 1999. Photo: Chris Souilijaert.

But, hang on, Polk Salad Annie is about a dysfunctional family. Annie's momma works on a chain gang, her father is a layabout, her brothers are thieves and her grandma was eaten by an alligator!

On the other hand, Rainy Night in Georgia is about a wanderer sheltering from those rainy Georgian nights while dreaming of his sweetheart. Is there another Polk Salad Annie in him?

"Maybe. I've got a new song, Gumbo John, about an old swamper who lived back in the woods - he got into trouble with some 'gators too ..."

The family man bursts forth when he talks of wife Leann, who joins him in songwriting.

"I kinda got the best deal and a good Texas woman. I've been married since I was 20. If I hadn't had a family, I could have drifted off into anything."

Not surprisingly, he pauses to add that Leann was the inspiration and focus of a song he wrote called Texas Woman.

"We just do our own thing. We may write two or three songs together in a year. Undercover Agent for the Blues was a big turning point."

That song as well as Steamy Windows got the Tina Turner treatment, a performer who is stellar in Tony Joe's eyes.

He sees a spiritual side to it all; the swamp, staying close to nature and being a receiving station for the songs he gets.

"On account of God lets me do this and it reaches people in different ways. It's not because of me. I don't know where they come from, they just pop out."

The man can't be accused of changing his approach to suit a market.

Back in 1969, colleague Ritchie Yorke wrote of Tony Joe's music:

You can't help but feel that you've been there. And if that's not honest and beautiful communication, I don't know what is.

He also highlighted the honesty of it: To the uninitiated it can be shocking, weird and maybe even horrifying, but it's real and that's what counts.

Tony Joe once said: I haven't changed a whole lot; I'm almost like a lone wolf out there. I just play my guitar and don't worry about it. They don't know if I'm black, white, country or rock.

Is it still the case these days? That's it. That covers a lot of ground, he says.

The connection between performer and public was obvious as Tony Joe thrived on the energy of the Blues Festival. He responded with humour when a fan jumped on to the stage and put an arm around him so someone else could take a photo.

For 90 minutes, with guitar, harmonica and drummer, Tony Joe was in his element. When Australia's Tex Perkins, of The Cruel Sea, joined him in singing Woman With Soul and High Sheriff of Calhoun Parish, the crowd was impressed.

For Tony Joe, the festival was a blast.

"I had some fun up there, it was a real good festival. That's like back home in the cotton patch. I'm pretty sure I'll be back."

Fans will love that.